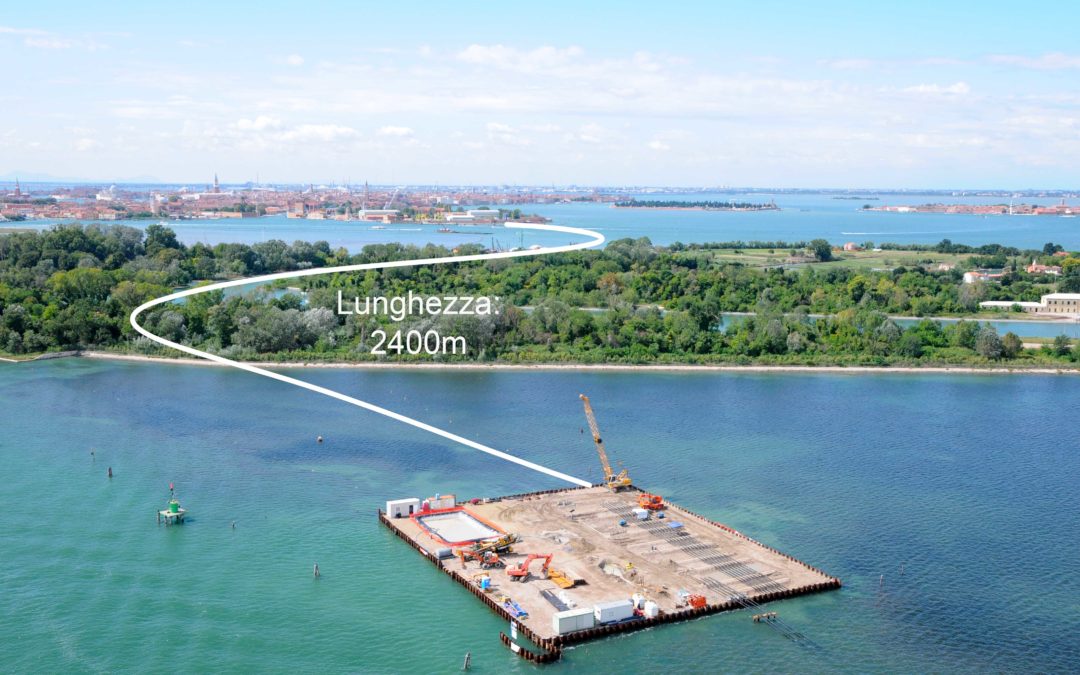 Anese Srl successfully managed to install two pipelines in parallel containing optic fiber, under the Venice lagoon at the total distance of 4.750m.

In 2014, Anese Srl awarded the contract to the Ministry of Infrastructure and Transport for the construction of two parallel pipelines, from the Arsenale to Isola Nuova in which optic fiber’s cable would be passed. The aim was to create an internet connection between Venice and the headquarters of “Consorzio Venezia Nuova” for the management of dames of Mose project.

In an area like the Venice lagoon, characterized by a delicate environmental sensibility, there were a series of complications according to complete the project.

Starting from, the reducing the minus possible the environmental impact due to the artificial checkpoints on the surface, then the non-invasion of restricted areas and the traffic boats of Venice people forced Anese to draw a specific path for the pipelines to follow.

This path was characterized by curves in depth and at sides. It was extremely important finding a way that would respected the measures required by the project, considering that the 80% of the path was under water. 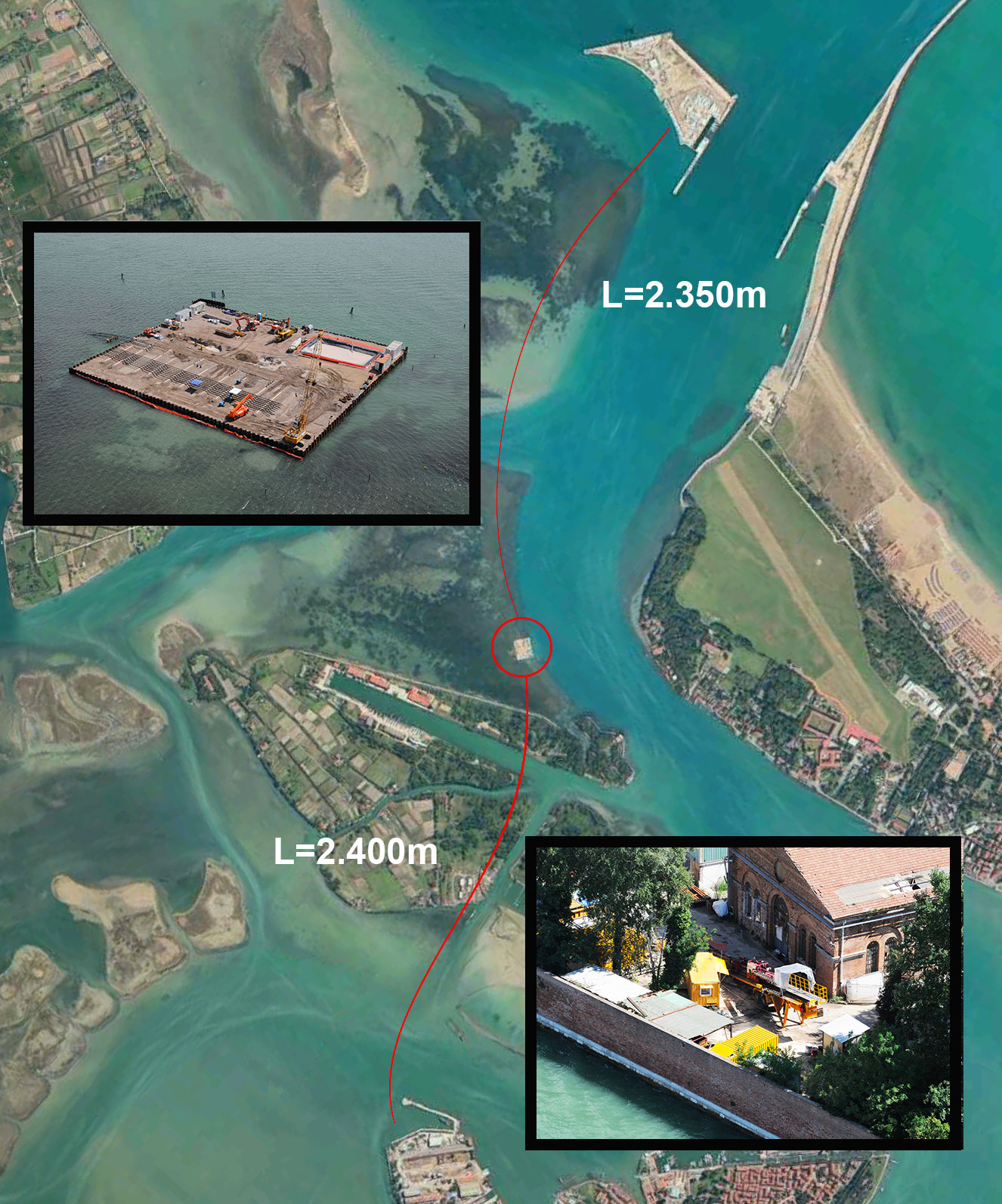 The original project foresaw the creation of two artificial islands as checkpoints for the drilling operations. From the beginning Anese wasn’t totally agree with this, because the technicians thought that one artificial island was enough to complete the job, in addition, they could save time, money and dramatically reduce the impact on the environment.

The role of the artificial island was to solve the difficulties of driving the drill on such a distance.

After 1500m it’s hard to guide the rods and follow the path in a precise way, so with this sort of checkpoint, Anese avoided the issue.

The construction of the network was built in two segments, the first from the Arsenale to the artificial island and the second from Isola Nuova to the artificial island, in this way there was no risk to miss the connection of the pipes because Anese used more than one drill machine, a necessity due to the choice of using only one checkpoint, to guarantee the interception between the two pilot holes.

According to permit the traffic boats in the Venice lagoon, Anese divided the operations of welding in four parts, in this way only 500m around the artificial island were off limits instead of more than 2km.

During the execution of the HDD (Horizontal Directional Drilling), on the artificial island, the steel pipes were positioned at the same height of the drilling machine, 1.75m over the sea’s level.

The connection between the pipes from the Arsenale to Treporti, according to the estimations, should have been done at the depth of 3.25m so to result 3m under the ground of the artificial island.

The condition to attach each pipe with the other was that they had to be dry, for inserting the optic fiber’s cable inside without spoiling it.

For this purpose, a shaft of -3.20m was built and the pipes were connected inside it with special joints.

After that, it was planned to build up a group of barriers, remove the soil inside and drain the water.

In the end, the barriers and all the equipment were removed. 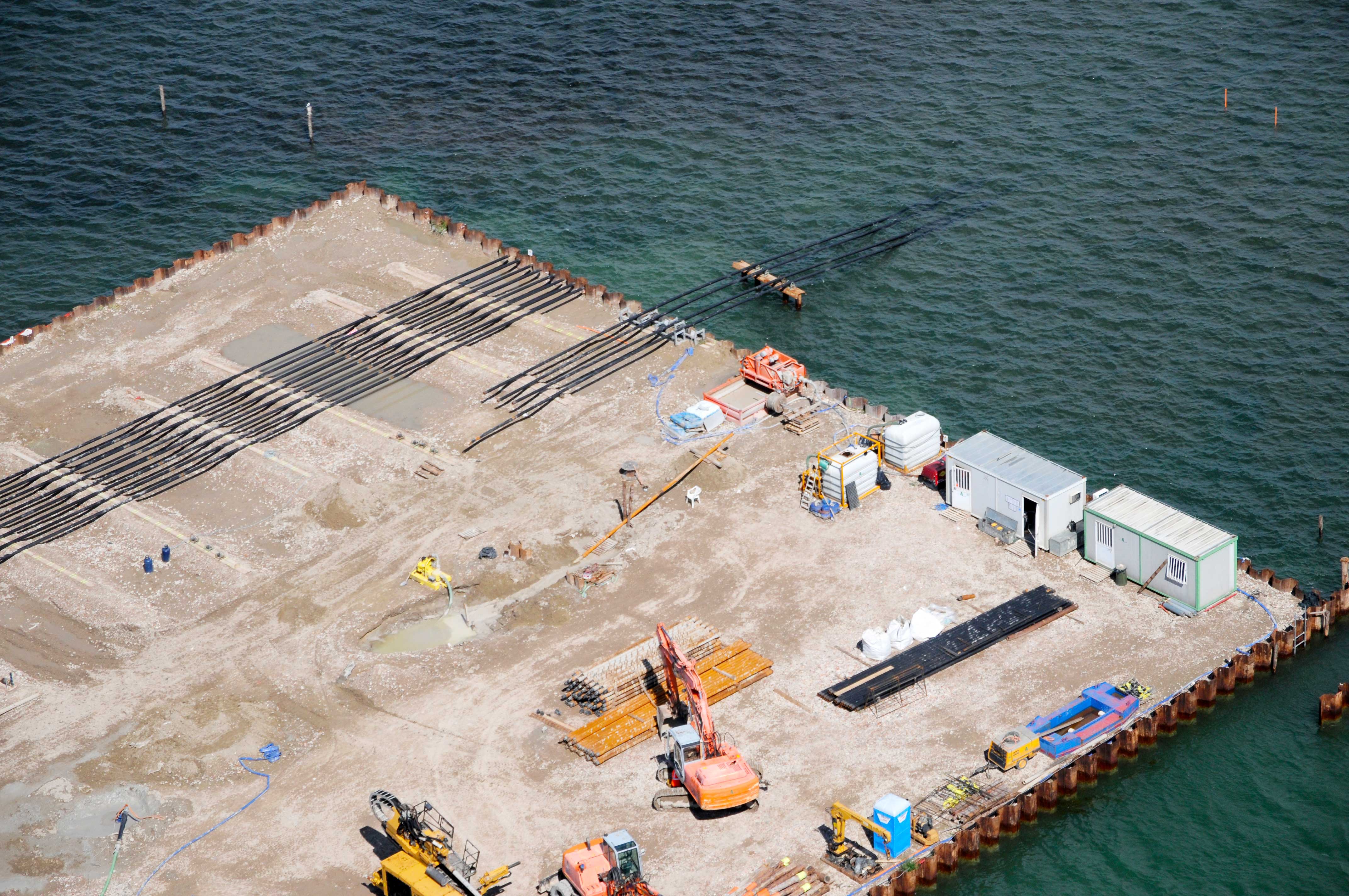 Pipes were laid down with the HDD method and they had the diameter of 139mm and thickness of 9.5mm. The connection between the two rigs was realized with some special joints that avoided the break up, keep the pipes dry.

Before the testing the conduct had been cleaned by welding slag using the technique named “pigging”.

This technique consists in inserting a steel item inside the conduct, with disks made of hard rubber calibrated with the diameter of the conduct, in the way they can clean it when moving.