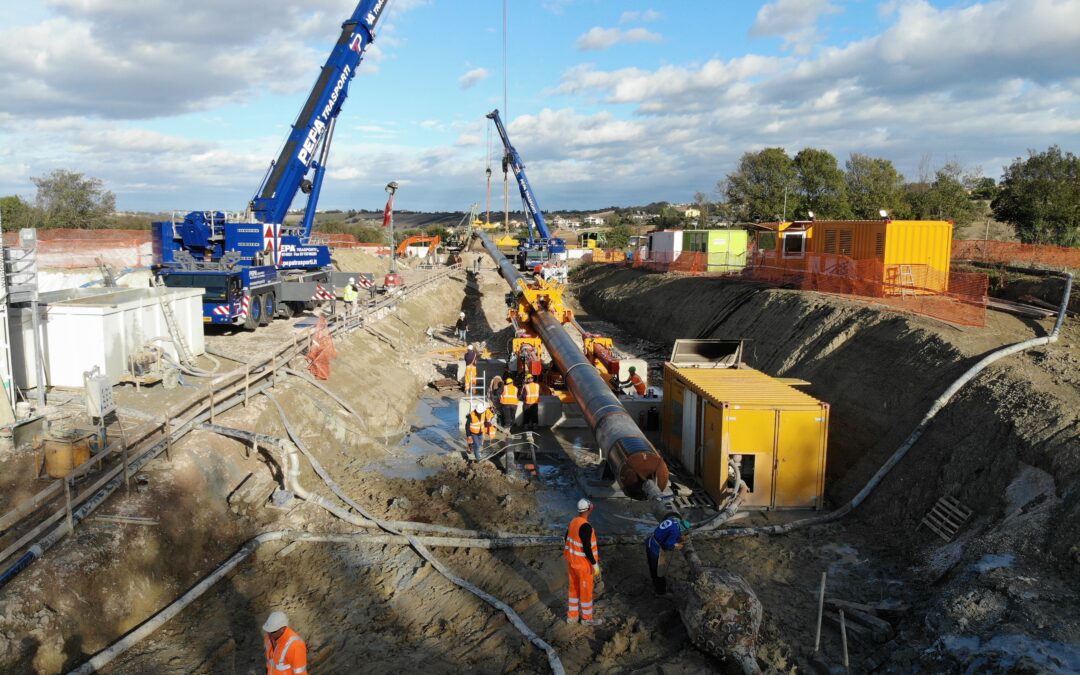 In the municipality of Polverigi, “Località Pacetti”, the construction of a pipeline was commissioned as part of the project Iesi – Recanati DN 1050 (42″).

Since the preliminary phases of operational study for the realization of the work, it emerged that the design solution presented some problems hard to overcome given the current state of the art. These problems were due to the expected length of approximately 782 m (for this suggested diameter not exceeding 500 m approximately), from the important difference in height between the start and end point of perforation of about 117 m with the consequent slope that varied from 20% to 26% depending on the stretches (limit imposed by the inspection cart approximately 11°) and finally from the radius of curvature of the pipe of only 800 m when the recommended one is about 1,100 m.

Therefore, a solution was proposed that consisted in performing all the preliminary drilling activities with TOC technology but, at the start of the pipeline, assist the TOC rig with the 500 ton Pipe Thruster.

Given the length of the crossing, the important difference in altitude and the compression resistances of the over-consolidated clay present, the following operational decisions have been taken: 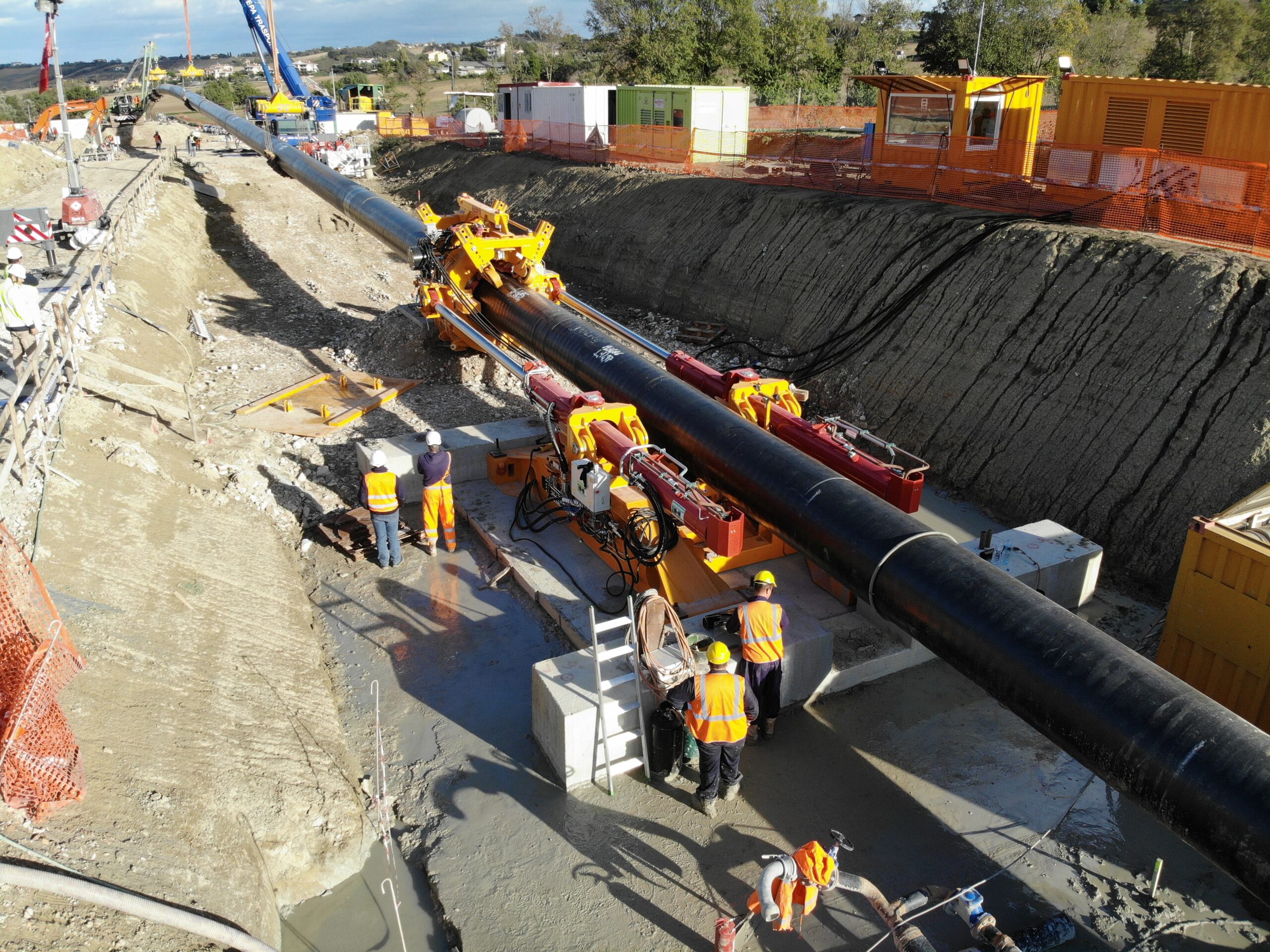 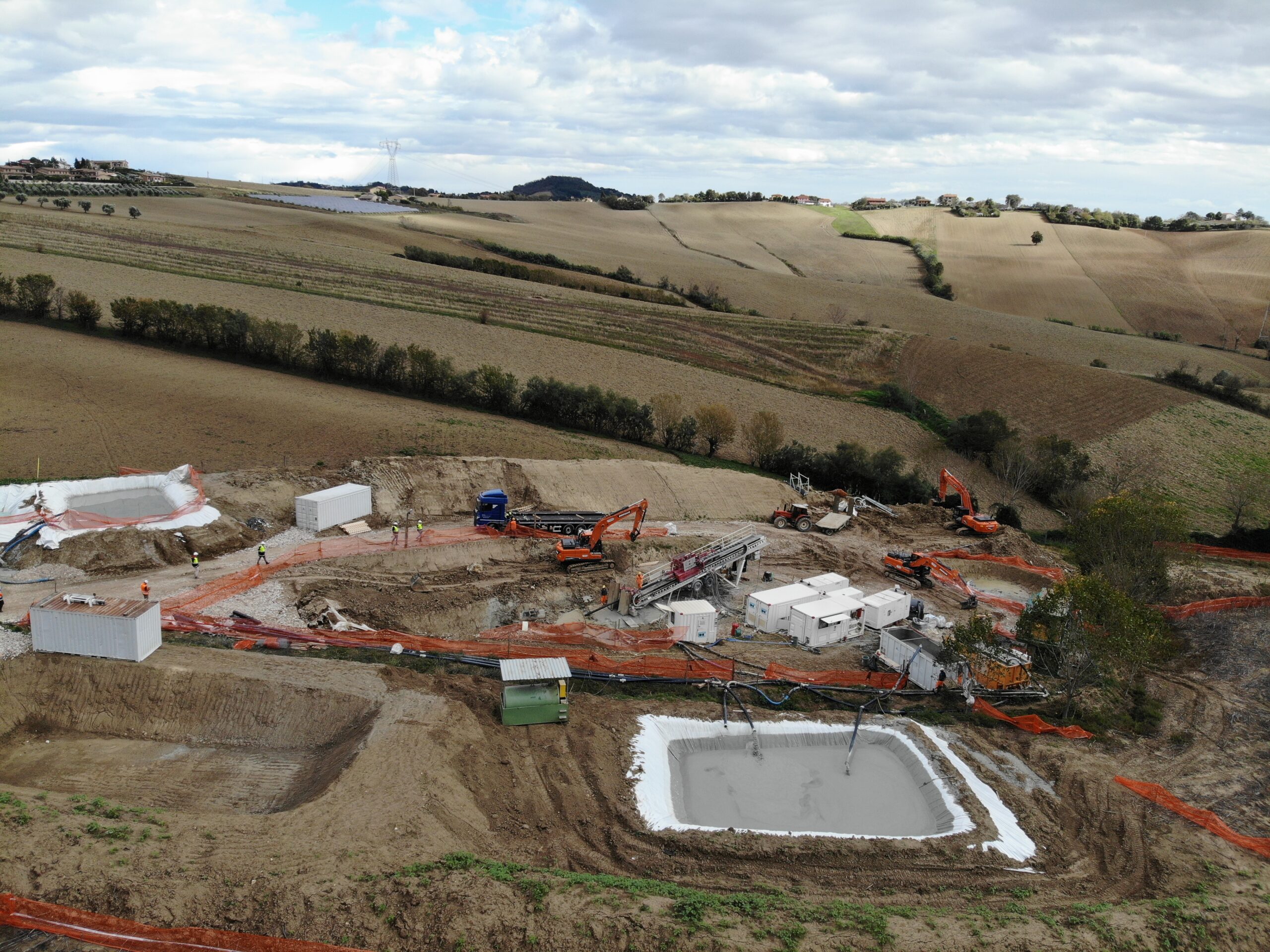 The difference in height of 94 m meant that a large part of the drilling hole remained completely empty, as the drilling fluids accumulated in the lower part forming a sort of siphon.

The pilot hole, both for the cable-carrying piping and for the line piping, has been realized with success and extreme precision thanks to the intersection technique. Immediately after the launch of the cable-carrying piping, it was used during all the subsequent phases as a by-pass for the recirculation of drilling fluids, carried from the bottom upwards thanks to high-head pumps.

Then began the boring phase necessary to enlarge the hole up to the diameter useful for launching. The activities progressed very slowly, due to the consistency and reactivity of the clay, but regularly. It was however necessary, upon completion of each bore, to carry out a cleaning counter bore in order to evacuate, from the lower part of the hole, the mass of clay that was accumulating leading to the risk of occlusion and dangerous pressure increases.

Boring activities have imposed the extension of shifts, working day and night, in order to respect the schedule. Upstream of the drilling, near the rig, it was necessary to install a casing (with a diameter of 1,400 mm, for a length of about 12 m) in order to keep the hole open in the section with the lowest coverage.

Reached the final diameter expected for the hole of about 1,200 mm and as a result of instability within some stretches occurred within it, proceeded: to carry out further cleaning/ compaction steps and, then to perform a new calibration bore to bring the hole to about 1,400 mm (with a hole opener type reamer). Everything is then ready for the final phase of launch and with an over-excavation sufficient to absorb possible instability in the flow of the hole.

During all the phases, the great mass of drilling fluids and clay has been managed using mixers and centrifuges for the reuse of water in the production cycle in order to significantly reduce the environmental impact and make the material is suitable for transport for aggregates.

It was completed a very demanding project with morphological and dimensional parameters at the limit of feasibility: inclined length m 1,205, difference in altitude between beginning and end drilling m 94 and a pipe to be laid of DN 1050 (42″).

This experience was very important for the company by having shown that the technical skills, combined with the high professionalism of the workers, were able to overcome potentially critical situations in an unexplored technical context.